BANGKOK, Sept. 19, 2022 /PRNewswire/ — On September 19, HUAWEI CONNECT 2022 kicked off in Bangkok, Thailand. At the event, Mr. Ken Hu, Rotating and Acting Chairman of Huawei, delivered a keynote titled “Unleash Digital,” where he talked about how the company is helping organizations make the most of cloud for leapfrog development. 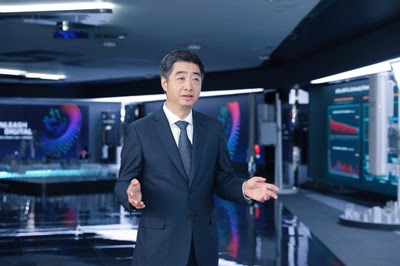 During his speech, Mr. Ken Hu spoke about how the First Affiliated Hospital of the Medical School at Xi’an Jiaotong University used AI to expedite pharmaceutical R&D and new drug discovery.

In the pharmaceutical industry, an average of over 1 billion USD and 10 years is needed to put a new drug on the market, from development to approval. While developing antibiotics, it has been noted that resistant bacteria are sometimes discovered even before newly developed antibiotics finish clinical trials.

By using an AI-aided drug design service powered by Huawei Cloud’s Pangu Drug Molecule Model, Professor Liu Bing of the First Affiliated Hospital of the Medical School at Xi’an Jiaotong University and his team developed a new broad-spectrum antimicrobial drug in just one month, and R&D costs were slashed by 70%.

A major challenge in new drug discovery lies in the screening of hundreds of millions of existing drug molecules. Traditionally, drug screening was performed by experts in labs, which was costly, slow, and had a high failure rate.

The Huawei Cloud Pangu Drug Molecule Model has been trained using the data of 1.7 billion drug-life molecules, and can predict the physicochemical properties of drug compounds and score them based on their druglikeness. Researchers can then do targeted experiments to verify drug compounds that have the highest scores.

Moreover, the Pangu Drug Molecule Model’s molecular structure optimizer can be used to optimize the structure of lead compounds, minimizing the potential side effects of the new drugs on normal human cells.

Today, cloud has become an important carrier for digital companies. Huawei Cloud provides four development pipelines, including ModelArts the AI development pipeline, which customers and partners from all industries can access on demand, so they can leave the technical side of digital innovation to Huawei Cloud, and concentrate more on what matters most to them.